The original twin towers are, sadly, long since gone but any New York visitor still has a choice of three iconic skyscrapers from which to admire and photograph expansive views of the city’s vistas and canyon-like streets – The Empire State Building, One World Trade Centre and the Rockefeller Centre. But which offers the best visitor experience and the photographic opportunities to the keen shutter-bug?

Like many things in the world’s greatest capitalist nation, even taking in a view is promoted as an “event” so it can be well and truly monetised. Getting to the top of these three towers isn’t cheap, especially for a family of four, and you might not have the time, funds or inclination to do all three.

But I have recently done all three as part of an 8-day city break, so I might be able to help you decide and prioritise. In these couple of posts I will provide you with a warts and all guide to visiting and photographing from each tower to help you decide which to spend your hard-earned cash on. I will also give you a few tips on what to look for and how to get the best images.

We spent a while shopping around and planning for our late August trip (because we thought it would be busy – we were right) and the best value we could find was the New York City Pass. This provided discounted, queue jumping access to the Empire State Building and the Rockefeller Centre, with the added bonus of a same-day, after dark, return ticket for the Empire State. Note that you can get discounted tickets from other sources and you will need to do your sums carefully if you are visiting as a family with kids, but for us, with the other attractions we intended to visit, the NYC pass worked out the best bet. You should spend some time making a list of what you want to see, the best prices you can get and then compare it to the all-in-one price of the NYC pass; it is worth the effort as it might only take half an hour and you might save a couple of hundred pounds – which is a good hourly rate in anyone’s book.

The One World Observatory is not included in any bulk voucher schemes and the best discount that we could find was 20% via their Mastercard Monday scheme. Put simply, if you book using a Mastercard and can visit on a Monday at certain times (including the most popular sunset, surprisingly), then you get the discount. You can also get discounts via the usual ticket sites like Attraction Tickets Direct and so on.

Ok, so you have the tickets…what about the gear?

As a photographer you will be visiting these buildings to take in the views and capture the best images you can. So you might feel the urge to get properly “geared-up” for what could be a once in a lifetime opportunity. At these prices it probably will be…

So remember your DSLR or CSC. A phone or compact camera will do but they will restrict your options as far as composition and low light levels are concerned. (I touched on the advantages of a DSLR/CSC in this post here)

But the first thing you can forget is a tripod. You might get away with a mono-pod but none of the venues allow tripods. If you have one on you at the Empire State it will be confiscated at the security bag-check and you will have to go back for it at the end of your visit. If you have a tripod on you at One World or Rockefeller, be prepared to be turned away, leave someone behind as a “tripod sitter” (painful) or bin it (perhaps even more painful). They are strictly forbidden and there is no storage. I saw a couple of little Gorilla Pods being used, but don’t bother with a full size tripod; it will cause you a big logistical headache.

I found this a bit limiting as light levels dropped around sunset so be prepared to open up your aperture and crank up the ISO.

Just using these sorts of lenses will immediately mean your photos will stand apart from the crowd. Virtually everyone I saw was snapping away on mobile phones or DSLRs with kit lenses. So you will automatically come away with photos that look different to 99% of the crowd’s photos because you will be able to take photos that have a far wider or far narrower field of view.

My general advice would be to travel light. You could be queuing for ages, you will be crammed into a lift with lots of other visitors and there might not be a lot of room on the viewing platforms – the Empire State is especially tight at peak periods. If you have an enormous gear bag on your back you are not going to be popular and you might in fact restrict your own photo opportunities simply because it will be difficult to maneuver the bulk through the crowds.

Ok, you have the tickets, you’ve got the gear… what about the ideas?

Empire State – The Original and Still the Best? 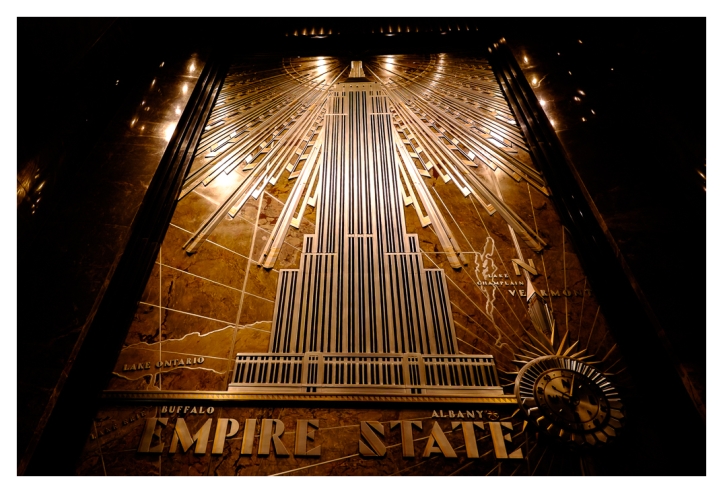 Are you really going to go to New York and not go up the Empire State Building? As a “must see” visitor attraction this has to be on your bucket list. But from a photography perspective – perhaps not. The views were indeed amazing but I didn’t want to take just another city vista (there were about 1,000 of those being taken every minute…) but I thought it was difficult to find a focal point amongst the urban clutter. You might have a different perspective. but just stop and think how many photos of the New York skyline have the Empire State in them. There is a solid story-telling compositional reason for that.

In many respects, the Empire State  Building is the very defining focal point you want in your images because it is the most iconic (and for me most aesthetically attractive) building in New York. But of course when you are standing on it… you can’t see it! None of the surrounding buildings are quite as iconic or as visually impactful. There are lots of skyscrapers in New York to choose from…. but there is only one Empire State to stand above all others – literally.

Now, our hotel concierge told us that the best time to visit the Empire State Building to avoid the queues was between 2pm and 5pm. We took her advice and she was right; if you go during those times the queues for tickets and security are almost non-existent and once you are up you can stay as long as you want – right across sunset if you wish. However, the viewing platform can get very busy around sunset and stays busy for quite a while after dark. On our second visit at 10pm the queues to get back up were significantly longer despite the late hour.

So to get a shot that has a chance of being genuinely visually interesting you will need to work through your bag of technical and compositional tricks. You will also need some sharp elbows because you could be jostling for position with literally hundreds of other people.

Your natural instinct will be to go wide – very wide – because there is just so much to take in when you first see such a breathtaking urban landscape. By all means do so, but pay attention to your composition and look for a focal point, repeating patterns or use streets as leading lines – or you could end up with pictures of an impressive cityscape of dozens of buildings scattered randomly across the frame. That makes a snapshot not a compelling photograph.

The shot below is the one I was happiest with. This was taken as the sunset cast a glowing sidelight across the city and is a blend of three different exposures to capture the full range of the light and emphasise the texture of the urban landscape. To get a shot like this you may well be wedged in shoulder to shoulder with a crowd at least three deep behind you – I was!

Apart from the obvious wide view, as the sun sets, the cityscape becomes a world of high contrast shadows and golden light that transitions to multi-coloured Bladerunner-neon. You might find the best way to capture this is to use your zoom lens to pick out clusters of buildings – the wide-angle in low light can render the city lights as just a pattern of  distant pin pricks, whereas the zoom transports the viewer right into the urban landscape of glowing towers and spires. Again, try to find lines, textures and colours that complement or contrast each other.

If you have a very steady hand or are lucky enough to find somewhere to prop your camera you might be able to introduce some long exposure light trails – I had no such luck  unfortunately! So perhaps try a different approach as it gets really dark and camera shake becomes an issue. Try to work with the conditions and deliberately introduce movement. Experiment by moving the camera in different ways to see what works best – vertical, horizontal, twisting. I settled on the technique of the “zoom burst”. This can be a bit clichéd and hackneyed but if you pick the right subject matter it can produce some really interesting abstract effects.

I found it worked best with a strong central subject to centre the burst on – it draws the viewer’s eye naturally into and around the frame. I think these would make great wall art printed large!

The Empire State Building is a great bucket list attraction. Architecturally, it is a fabulous antidote to the sea of anodyne glass blocks, but the viewing area does show its age. It feels quite cramped and gets very crowded very quickly. The urban landscape view is fantastic but as you will see from the second part of this post, I prefered the views from and visitor experience of, another of the New York Towers! You might too….

In the end, my favourite shot of the day was taken from ground level so don’t forget to exploit this perspective, especially at twilight when there will still be some colour in the sky. You will come away with the perfect postcard travel shot to show your friends when you get home.

In the next couple of entries, I will look at the other two tall towers with dedicated visitor experiences. You might be surprised which one turns out to be the best:

One World Observatory – New Kid on the Block

Rockefeller Centre – The Little Fella at the Back